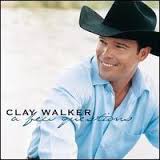 Years ago in a small town outside of Houston, Texas, Clay Walker dreamed of becoming a country music sensation. Today, he has seen his dream turn into reality. Since his recording debut in 1993, Walker has scored 11 No. 1 country hits and sold more than 10 million albums. “Fall,” the title track of his most recent album, became a Top 5 hit.

In 1996, at the age of 26, Walker was diagnosed with multiple sclerosis during one of the most pivotal points in his life. Walker had just completed his fourth album, the country music career he had always dreamed of was taking off, and his first daughter had just been born. The last thing he expected was the numbness, tingling and facial spasms that led him to the doctor and a diagnosis of MS.

Walker was concerned about how MS would affect his life and career. Fortunately, thanks to drug management, healthy diet and exercise, Walker, who was unable to hold a guitar pick in his right hand at the time he was diagnosed, has since regained feeling in that hand and his right leg, allowing him to continue his successful career and active lifestyle.

In characteristic fashion, Walker views MS as a motivating force. Since publicly stepping forward and revealing his many-year struggle with MS, Walker has made it his mission to help others with the disease. In 2003, Clay established Band Against MS, a not-for-profit organization committed to providing educational information for those living with MS and funding rearch toward a cure for MS.

His status as a frontrunner working toward a world free of MS attracted the attention of the National Multiple Sclerosis Society, which awarded him its most prestigious honor as Ambassador of the Year — only the fourth person to receive the award in the Society’s nearly 60-year history. He also became the Honorary Ambassador for the 2005 Bike MS cycling series and has participated, along with his band mates, in many Bike MS rides across the country.